December, 11 2014 / By Lazydays - Products
What’s more fun than stopping off to see a wonderland of oversized mushrooms and gnomes, or, better yet, visiting a makeshift town built by a cowboy in the middle of… 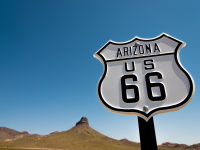 What’s more fun than stopping off to see a wonderland of oversized mushrooms and gnomes, or, better yet, visiting a makeshift town built by a cowboy in the middle of the desert? We confess that there’s a special place in our hearts for all things offbeat. And there’s plenty of that in southern Arizona, just a dusty dirt road and a few old signposts away. If you’re daring enough to venture into some of these admittedly strange locations, get ready for a truly fun experience at these enticing roadside attractions.

1. Funky Fantasy: Valley of the Moon

It all started with a man (or was he a gnome?) named George Phar Legler, whose story is somewhat like the fairy tales he so believed in. After World War I, George began building this quirky maze of caves and miniature castles in what was then a remote corner of Tucson. He dotted his eccentric landscape with small gnomes and embedded his enclosures with stones and minerals, all heralding a philosophy that “happiness is given, not sold.” George lived secluded on the property until the 1970s, when a group of high school students helped him renovate his wonderland. The students inherited the property when Legler died.

Tucson may have grown up around this storybook place, but Valley of the Moon still exists in a lovable, haphazard way, kept alive through a band of volunteers. According to the Tucson Historic Preservation Foundation, which helped this whimsical treasure get listed in the National Register of Historic Places last year, Valley of the Moon is a “rare expression of post-World War I Spiritualism” in Arizona, illustrating the character and architecture of a mythical movement.

The George Phar Legler Society opens this fantasyland to the public once a month, and for special events held seasonally, including spring faerie performances of Peter Pan and Halloween. Valley of the Moon, built by a kind eccentric, leaves a lot to the imagination. While it may not be as slick as Arizona’s more publicized roadside attractions, this curious place is worth a trip. It’s essential to call first for information and openings.

Head 40 miles southwest of Tucson, along bumpy dirt trails best navigated by sturdy vehicles, and you’ll find an odd assortment of buildings that tell lots of stories about the code of the west. If you call founder Edward Keeylocko, he’ll give you a tour of his strange, 80-acre place — a working ranch and near-ghost-town that adventurers still visit.

Ed built his collection of wood and tin buildings in the 1970s, after returning from the Vietnam War, to “live like a real cowboy.” Mostly by word-of-mouth, visitors arrive (sometimes for overnight festivals or for movie productions) to photograph the odd “town.”

Wander through Keeylocko streets now and you’ll discover bizarre buildings including a general store, a library and a barnyard with cows and pigs (who also roam through the town). There’s the Blue Dog Saloon, too, full of endearing junk. You can still take a seat at the bar next to Ed, and if you call ahead, he just might dust off a chair for you. It’s not clear why the friendly cowboy keeps his place open to public, but we’re sure glad he does. Call ahead and don’t expect fancy digs.

If you embrace the notion that rattlesnakes are, well, everything, then a trip to peculiar Rattlesnake Crafts is a worthwhile, goofy road trip just outside of Tombstone, Ariz. What started out as a way for John and Sandy Weber to live a simple lifestyle turned into a quirky passion – rattler hunting. Licensed by the state, the couple hand-makes a wild assortment of rattlesnake crafts, from belts to pouches.

The Weber shop is open daily and sits within an acre of desert, featuring thousands of western antiques and oddities on the property. The collectibles aren’t for sale, but meander the grounds and you can pick up a must-have rattler-based souvenir. The ghost town of Gleeson is nearby, for a bonus side trip. A well-maintained dirt road will get you there. Visit the website for directions.

Traveling a 200-mile stretch of Interstate 10 outside of Tucson, motorists are teased by not-so-subtle roadside billboards heralding The Thing. After about the 50th signpost, annoyance turns to curiosity, and you’re hooked. What’s up with The Thing?

Since the 1960s, The Thing has been one of Arizona’s most enduring (and perplexing) roadside attractions. If you’re willing to part with a dollar, you can venture behind the gifts and memorabilia in the trading post and continue past an odd unraveling of displays, old vehicles and sheds full of strange stuff. Yes, there is The Thing at the end of a baffling series of dusty exhibits.

Is this your usual irritating tourist trap or strange adventure? All we can say: If you’re on the interstate and pass this roadside mystery — it only takes a dollar to discover your answer. Open daily.

Ostriches in the Arizona desert? An odd encounter, but fun, too. You’ll find them near historic Picacho Peak State Park, at the Rooster Cogburn Ostrich Ranch, a 600-acre, family-owned spread that greets you on the road between Tucson and Phoenix.

Native to Africa, ostriches thrive in the desert and are the largest living bird in the world. This working ranch features an amiable herd of the critters. It’s also an entertainment spot, offering bird feeding and a gift store that sells eclectic feather dusters, ostrich eggs and quirky souvenirs. Monster truck tours will take you out into the desert, where you can watch the ostriches — which can live 75 years and run at speeds up to 40 mph. The 4-wheeling adventures also include “ostrich fishing.” Stop in to see the ostriches roam and discover what makes this ranch one of the area’s most popular roadside attractions.

Before you head off in your RV to see all that Arizona has to offer, drop by Lazydays in Tucson for a tuneup, or to browse for your next RV. 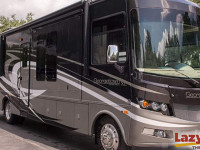 The 2016 Forest River Georgetown is prepared for all of the adventures you have planned for the new year. It's engineered to remain efficient and durable for extended amounts of time… 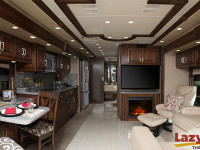 American Coach is constantly raising the bar for Class A diesel motorhome manufacturers. They're always at the forefront of RV design, whether its an RV's construction, engineering, stylish appeal or… 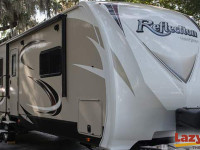 There's no better way to start a new travel year than with the 2016 Grand Design Reflection. This travel trailer offers a lot of bang for your bunk with incredible… 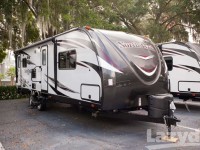 The Heartland North Trail is the affordable, lightweight travel trailer you need to help you adventure more in 2016. This luxurious, comfortable and durable home on wheels is available in…