“Given the difficult industry conditions in the fourth quarter, we are pleased with our performance during the quarter,” stated Mr. William Murnane, Chairman and Chief Executive Officer of Lazydays. “We are also excited to have continued our geographic expansion by closing on our acquisition in Knoxville, Tennessee. Our Minnesota and Tennessee dealerships contributed little to fourth quarter sales and are not expected to contribute much in the first quarter of 2019 given the seasonality of these locations. However, these two new locations should have a much more meaningful impact on Q2 and Q3 in 2019. Moreover, these dealerships along with our planned greenfield dealership in Nashville, expands Lazydays’ footprint into new fast-growing markets and diversifies our revenue base geographically.”

The Company has scheduled a conference call at 10:00AM Eastern Time on March 21, 2019 that will also be broadcast live over the internet. The call can be accessed as follows:

Via phone by dialing 1-844-343-9114 for domestic callers and 1-647-689-5132 for international callers. Please dial in and request Lazydays Holdings, Inc. Fourth Quarter and Year End 2018 Financial Results Conference Call; also via webcast by clicking the link.

A live audio webcast of the conference call will be available online at https://www.lazydays.com/investor-relations.

Since 1976, Lazydays has built a reputation for providing an outstanding customer experience with exceptional service and product expertise, along with being a preferred place to rest and recharge with other RVers. Lazydays consistently provides the best RV purchase, service, rental and ownership experience, which is why more than a half-million RVers and their families visit Lazydays every year, making it their “home away from home.”

Lazydays Holdings, Inc. is a publicly listed company on the Nasdaq stock exchange under the ticker “LAZY.” Additional information can be found here. 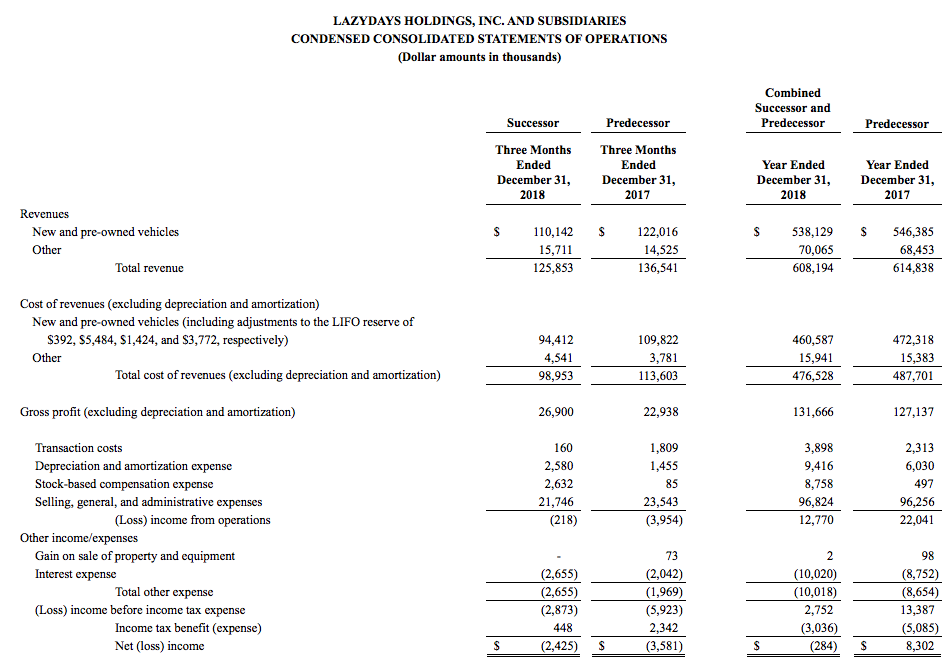 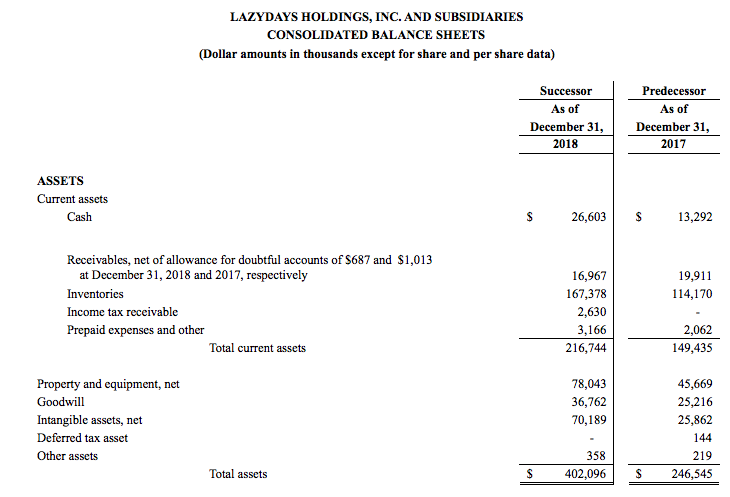 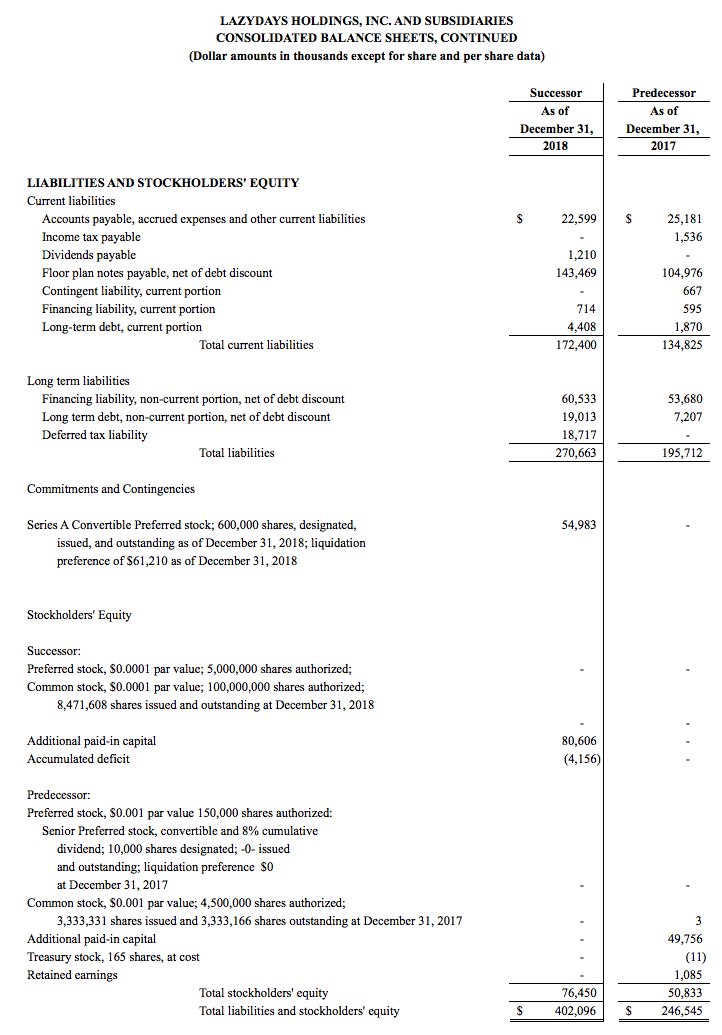 We use certain non-GAAP financial measures, such as EBITDA, Adjusted EBITDA, and Adjusted EBITDA Margin to enable us to analyze our performance and financial condition. We utilize these financial measures to manage our business on a day-to-day basis and believe that they are useful measures of performance as they reflect certain operating drivers of the business, such as sales growth, operating costs, selling and administrative expense and other operating income and expense. We believe that these supplemental measures are commonly used by analysts, investors and other interested parties to evaluate companies in our industry. We believe these non-GAAP measures provide expanded insight of the underlying operating results and trends and overall understanding of our financial performance and prospects for the future. The presentation of non-GAAP financial information should not be considered in isolation or as a substitute for, or superior to, the financial information prepared and presented in accordance with GAAP.

Our use of EBITDA, Adjusted EBITDA, and Adjusted EBITDA Margin may not be comparable to other companies within the industry due to different methods of calculation. We compensate for these limitations by using each of EBITDA, Adjusted EBITDA, and Adjusted EBITDA Margin as only one of several measures for evaluating our business performance. In addition, capital expenditures, which impact depreciation and amortization, interest expense, and income tax expense, are reviewed separately by management. We may incur expenses in the future that are the same or similar to some of those adjusted in this presentation.

Adjusted EBITDA is defined as net (loss) income excluding depreciation and amortization of property and equipment, non-floor plan interest expense, amortization of intangible assets, income tax expense, stock-based compensation, transaction costs and other supplemental adjustments which for the periods presented includes LIFO adjustments, severance costs and other one time charges, and gain on sale of property and equipment.

Reconciliations from Net (Loss) Income per the Consolidated Statements of Income to EBITDA, Adjusted EBITDA, and Adjusted EBITDA Margin for the three months and year ended December 31, 2018 and 2017 are shown in the tables below. 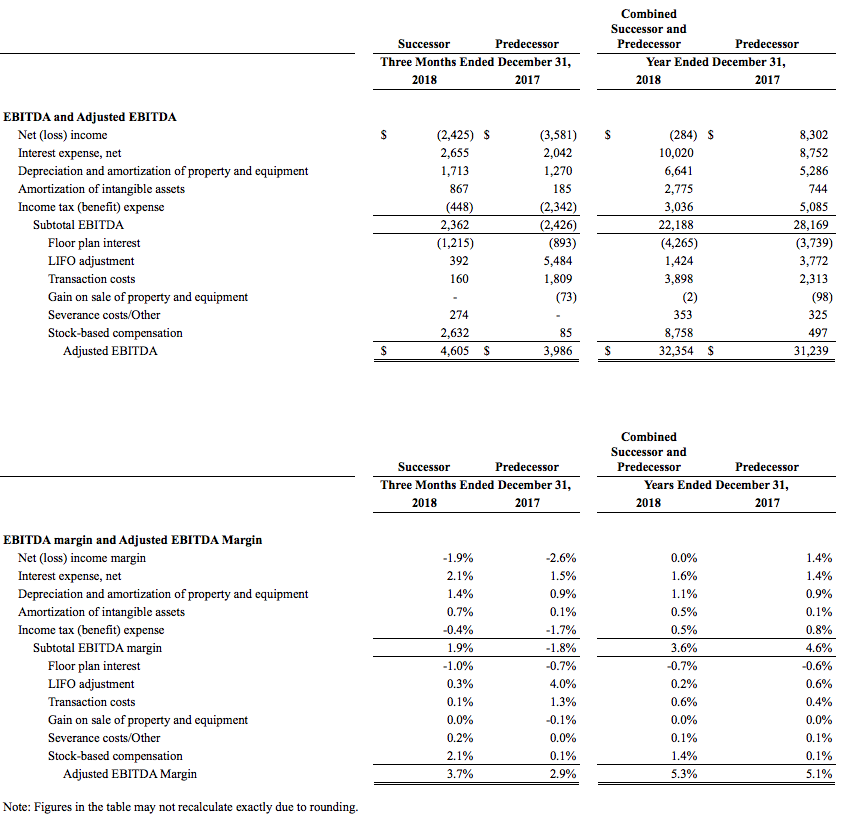 Be the First to Know!

Stay up-to-date on all things Lazydays RV with access to the latest sales, promotion details, sweepstakes, and more offers you won't want to miss.

Thank you for subscribing!